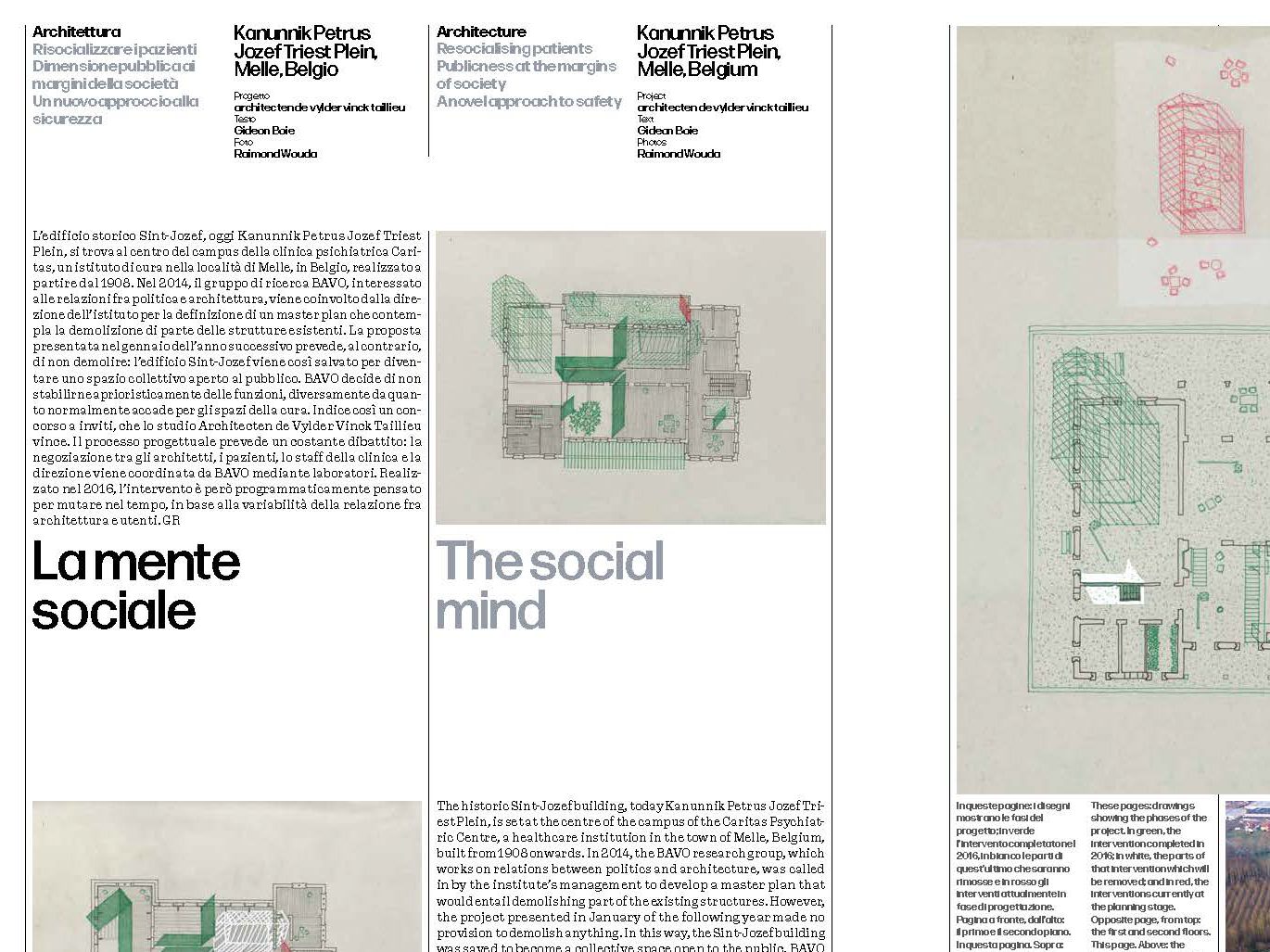 The Kanunnik Triest Plein in the Karus Psychiatric Centre – better known as the PC Caritas project designed by Architecten De Vylder Vinck Taillieu – has gained international attention after being featured in glossy magazines, presented at the Venice Biennale in 2018 and winning prestigious prizes. The monumental outdoor space speaks to the imagination and simultaneously raises some hard-to-answer questions about architecture in the context of mental healthcare. I will discuss three questions that we often receive from the public that allowed us – management, staff and architects – to sharpen the conception of this unusual square.

Nobody to be found, yet still fully in use

“We were very impressed after visiting the Kanunnik Triest Plein recently, but we must admit that we did not find anybody there.” This is a comment we often receive from the public. It would be too easy to say that architecture’s public is searching for a justification for their aesthetic pleasure, but the question of use certainly comes as a petty excuse in the context of a psychiatric centre. It is perfectly possible for a visitor not to find a living soul in the Kanunnik Triest Plein, however the opposite would be as much of a surprise. The Kanunnik Triest Plein was conceived as the festival location for official receptions and the annual open house, but it would be absurd to expect a pleasantly busy atmosphere. The square is also used as an informal platform for therapy sessions and group activities, but again these institutional activities do not run around the clock. Perhaps the most important use revolves around patients taking a short break, youngsters gathering in the evening, or people passing by on their daily walk to the hospital restaurant. The Kanunnik Triest Plein should therefore not be disconnected from its context – a psychiatric complex with around 305 beds and an outreach of no less than 1,000 patients – in which it was intended to function as nothing but an in-between space.

Moreover, visitors seem to leave their own presence out of the picture, as if they embody a pure gaze observing the psychiatric universe, a world in which they play no part. Turning the perspective around, we started to see the visitors themselves as the users of the Kanunnik Triest Plein. If the square had not been designed by De Vylder Vinck Taillieu, the visitors – often architects – would probably never have set foot in the psychiatric centre, located between two unremarkable villages near Ghent.

Perhaps unwittingly, the many visitors do provide an unexpected answer to perhaps the most difficult challenge that the workshops of psychiatrists, management, staff and patients were facing in autumn 2014. Given the non-urban location of the psychiatric campus, the “reverse socialisation” of mental healthcare seemed to be an impossible dream.

The question was whether or not the psychiatric centre could also accommodate social services that are not directly linked to mental healthcare and thus also provide space for spontaneous encounters. Although there is no direct interaction with visitors, we should not underestimate the effect of their presence on patients and staff, recalibrating the geography of the psychiatric institute and bringing the margins of society to the centre of international attention. In this light, the lonely visit is nothing but a missed opportunity to meet in architecture one of the many people staying in the hospital, who are often eagerly looking for a chat.

Another discussion that arose with the international attention regarded the continuing conservation needed to keep the Kanunnik Triest Plein functioning as a public space. In the commission to turn the partly demolished Sint- Jozef pavilion into a monumental outdoor space, De Vylder Vinck Taillieu responded by carrying out specific interventions only. These actions included removing sections of rotten floor, clearing away organic material, cutting the windows to the ground, opening up the basement, turning the chimney into a fireplace, and so on. The building’s physical structure was left intact, avoiding irreversible interventions to leave open the possibility of reconstruction one day. The physical decline of the building was to be monitored year byyear, but here again the idea was to intervene only if necessary. It was anticipated that the wooden floor would be the first to require re- placing, then the gutters in the following year, the roof structure one year later, and so on. However, as the wooden floor had not been constructed to be exposed to the forces of nature, it deteriorated faster than expected and also caused the deterioration of some supporting beams. As a result, the timber stock that had been purchased – and temporarily used in the Venice Biennale installation – turned out to be insufficient. This increased the enthusiasm not only to replace the wooden floor, but also to conduct a more comprehensive operation on the monumental outdoor space.

The central idea was to expand the limited social facilities (now basically providing only empty spaces with light, firewood and Wi-Fi) with a kitchen and meeting cafe, move two green-houses into the front and back garden, eventually close the roof, create a playground, install a giveaway box, outdoor exercise equipment and other amenities.

However, the ambitions outgrew what was considered to be a justifiable investment. After all, the creation of the monumental outdoor space had already cost at least twice as much as the estimated initial demolition cost. Our starting point was the bid that we could do better with 200,000 euros than just saving the weathercock and the statue of Saint Josef as garden elements. On top of that, all costs were covered by the scarce resources of the Zusters van Liefde (Sisters of Charity), which with good reason makes the management prioritise urgent issues. All this makes the Kanunnik Triest Plein once again a symptom of mental healthcare: while the government expects a resocialisation of mental healthcare services, it only provides subsidies forresidential building programmes – using the “bed” as a calculus unit. The international attention for the Kanunnik Triest Plein thus acquires a very political significance, since the psychiatric centre appears for the first time as a public space.

Finally, many ask us how a ruinous construction like the Kanunnik Triest Plein can be justified in the context of mental healthcare, where many patients suffer from dark thoughts. This brings us to the issue of patient safety. Shortly afterthe opening inJune 2016,a suicide attempt was the reason to close the staircases with floor- to-ceiling fencing. The gate was only meant to control who goes upstairs, and the key was available at the reception for anyone. The issue of patient safety is certainly not to be underestimated, but it is just as often over-exaggerated. Psychologist Ferdy Marysse argued that the Kanunnik Triest Plein certainly has a romantic appeal to patients with suicidal ideas, yet at the same time it offers a unique opportunity to do what is so difficult elsewhere in the hospital: putting dark thoughts into words.

In reality, however, the fence increasingly came to function as a definitive closure of the two upper levels, especially when it emerged that the wooden floors were deteriorating in certain spots. In Spring 2019, the independent safety committee deemed the risk of accidents too high and decided to close off the staircases. The closure was made visible with no access signs and an extra chain lock.

Although not incomprehensible, this risk assessment sparked much discussion. General director Herman Roose jokingly stated: “The chain is to keep Herman out; patients eager to go up will easily break the gate open.” In a later discussion a patient questioned the general di- rector about the dramatic chain lock, asking: “So, don’t you trust patients staying in the clinic? Don’t you consider us accountable for our actions?” The painful conclusion was that a place intended to act as an in-between space in the psychiatric hospital – a place escaping any functionality – started to confirm the stigmatisation of mental illness.

The remark prompted us to find a solution for the safety issue as soon as possible. Many options were considered in successive meetings, from completely waterproofing the second floor (making the floor function as a roof) to completely removing the floors (making the staircases function as a watchtower). After long and often animated discussions, the solution for the safety problem was identified in removing the safety measures, not only the signs and chain lock prohibiting access, but also the fence itself. The decision was made to reopen the staircase and allow free access to the first floor, not without checking all the windows and reinforcing them where necessary.

Use, deterioration and safety were three architectural factors that were found to be inextricably intertwined in the Kanunnik Triest Plein. How could a new investment be justified on the basis of minimal use? How can the square be fully opened without compromising patient safety? Can we initiate use without patronising patients? Will handing over the key to the patients allow them to take care of the square? How much deterioration can a psychiatric hospital tolerate? Is it possible to find subsidies for the deterioration of a building? These many challenging questions took us beyond architecture while confronting us with architecture more than ever.

Caritas and the Silver Lion