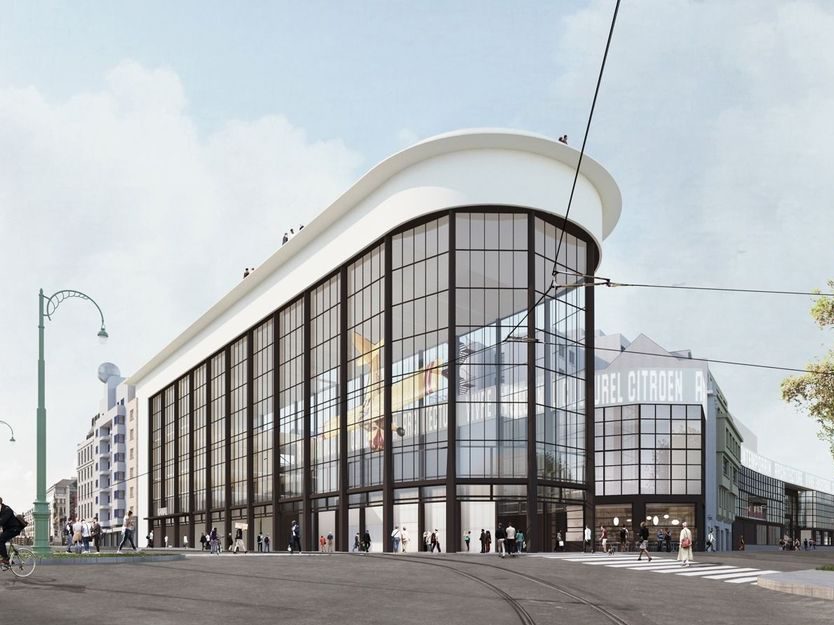 'Pessimism in theory, optimism in practice' is a slogan by Lieven De Cauter installed in giant font size at the foyer of the Kaaitheater in Brussels. Although I have always affirmed the message, it does raise questions when we look for a place for criticism in the equation. After all, architectural criticism is informed by theory, but it does closely follow practice hard on the heels. Criticism is somehow pessimist, but does not want to retreat in abstract reflections. On which side will we then situate criticism? How much pessimism can practice endure? Is practical criticism possible without nullifying optimism? Is optimistic criticism doomed to write retroactive manifestos? And how much pessimism does design practice tolerate?

The questions surfaced after a sofa talk with An Fonteyne, frontwoman of noAarchitecten. “The duty to be optimistic” was the advise An Fonteyne provided when discussing the design by noAarchitecten + SergisonBates + E2MN for KANAL Centre Pompidou, the future cultural pole in Brussels located in the iconic Citroën garage. The cultural pole will operate as a “generous space in the city”, which is part of the urban life around it. The design brings two worlds together within the former garage complex: on the one hand the air-conditioned museum space and associated programmes (archives and the like) and on the other hand the large sea of open space that stretches from the majestic showroom (where the meters-high windows will slide open at street level, overflowing into the Sainctelette square) over the slopes into the old workhouses. “You will not enter a museum”, said An Fonteyne, “in KANAL everyone will have the opportunity to loiter around”.

One person in the public reproached, wondering how generous KANAL will be for the general public, most notably the transmigrants who spend the night a little further in the Maximilliaanpark. An Fonteyne’s answer: “The intentions are clear, we can only be positive”. She considered the critical reflections on the KANAL project fully justified and legitimate, but the good intentions are such that failure is not one of the options. The question is whether the architect’s optimism is not somewhat exaggerated. You don’t buy a lot with the good intentions of the client, for whom the programme of the cultural pole is by no means finished. Also, we should keep in mind that architecture is not only built on the good intentions of the architect, but just as much on the reception by the public and the very everyday consumption of the building.

With optimism, An Fonteyne passed on the professional ethics of a practising architect to the critical audience. In the draft text on KANAL, noAarchitecten speaks about their design in terms of a ‘radically optimistic architecture’, with good reason. A service provider can only believe in the project for which they are applying, the opposite would be quite surprising. The question is why do critics have to follow the same professional ethics.

It brings us to a second – and perhaps deeper – reason why criticism of KANAL is somehow misplaced. KANAL is about more than just KANAL. The cultural pole in the former Citroën garage is the cornerstone of the Brussels canal zone development, an industrial zone whose messy character was for years a symbol of the general degeneration of Brussels. In the ‘Plan Canal’, the Brussels Government Architect Kristiaan Borret reversed the roles and portrayed the canal as a connecting element in the city. Part of the ambition is the awarding of the design commission to an architectural firm that is not linked to the Brussels real estate sector.

The struggle with the big evil real estate sector creates an almost compulsive optimism in the scene of architectural culture. Arrows are aimed at ‘the other’ of architecture, i.e. political power, profit-seeking economy, narrow-minded local residents, etc. The architecture scene closes ranks around their own gods. After all, good practices in architecture are by definition considered as equivalent to critical design practice. This is understandable, because deviating from banal building is precisely the trademark of quality architecture. An ill-considered architectural practice is a contradiction in terms. In such a context, traditional architectural criticism finds no place, or does it?

When Lieven De Cauter and I loudly questioned the design Robbrecht & Daem architects for the Beer Temple – our arrows focused on the reduction of a symbolically laden building like the Beurs to a Beer Temple – the indignation among architects’ brotherhood was great. After all, who would have thought it possible to bully a design by Robbrecht & Daem, while there are other kittens to be whipped in Brussels. Here, too, the fear was that the criticism jeopardised the design commission, at a time when, for once, an iconic project is not getting into the hands of the corporate architecture offices in Brussels.

It was only a good year later that Kristiaan Borret stated that the criticism of the Beer Temple did have a positive effect, since the urban planning advice issued by the Brussels Government explicitly demanded that the beer theme be reduced. It was an unprecendented piece of advice, Kristiaan Borret said, since an urban planning department in Brussels usually only comments on the colour of the glass facade, the construction of the pavement or the number of parking spaces, not on the quality of its content.

The paradoxical conclusion is that the increase in ambition with which the architectural sector called for its support for the Beer Temple was only made possible by jeopardising what is most dear to us, i.e. the architectural quality drawn Robbrecht & Daem. Conversely, going uncritically along with the dubious programme of the Beer Temple to save Robbrecht & Daem’s design was perhaps the worst form of self-flagellation with which architects deny their canon – in particular Michael Sorkin’s criticism of the theme park as a handbook for understanding inner-city shopping and party culture.

The short history of the Beer Temple debate shows how difficult it is to incorporate criticism into architectural practice, to transcend the immediate resistance aroused by a critical intervention and to see how the pessimism of criticism works through into the reality of a design process in its very own way and according to its own timeframe.