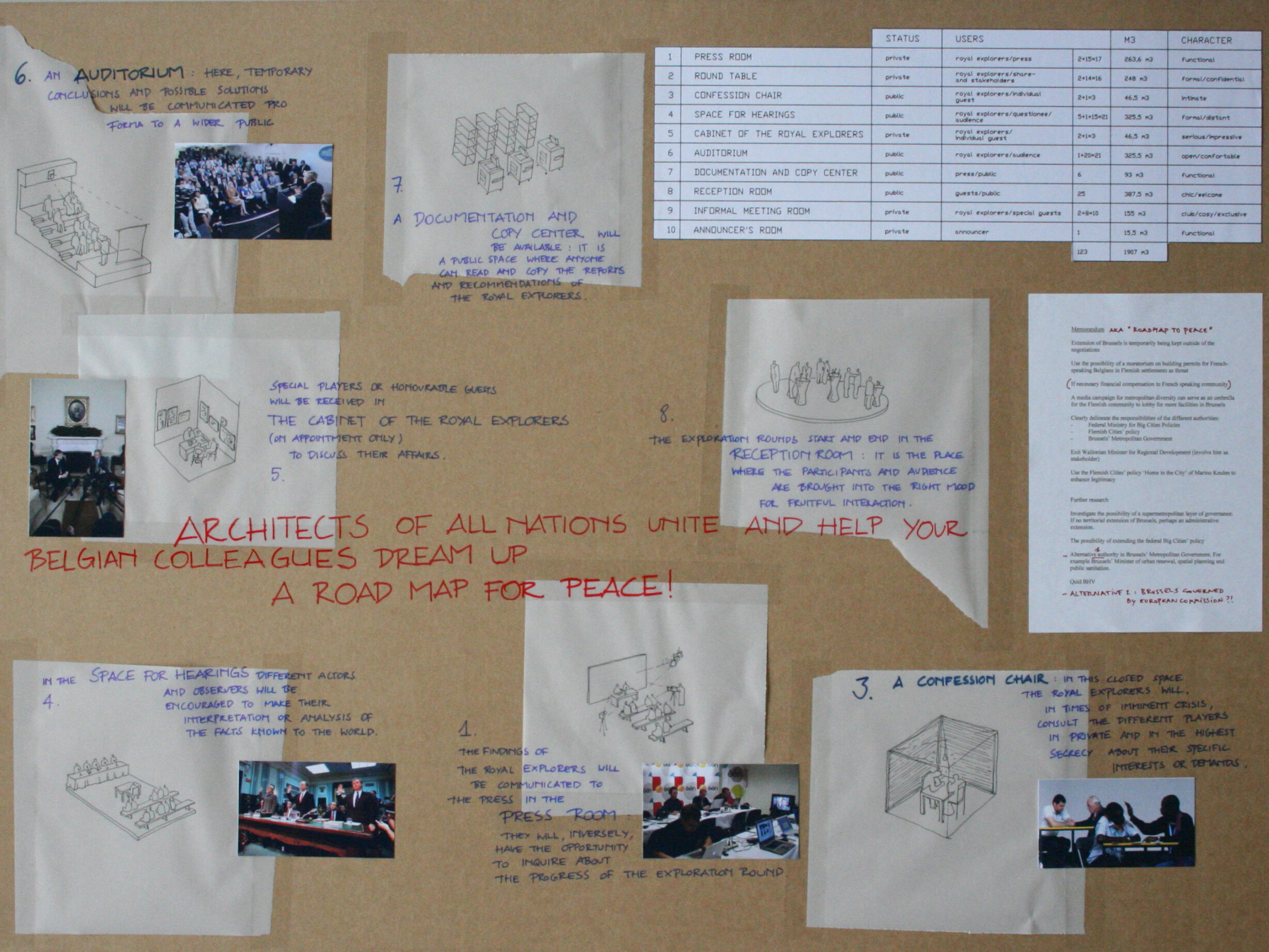 Concerning the formation of the Office of the Royal Explorer, entrusted with the task of unravelling the deadlock around the Belgian and European Capital

Highly respected members of the jury,

As you might have heard or read, the Belgian pavilion in the exhibition grounds in Venice celebrated its centennial last year. Nobody would have expected, however, that already the year after, its very existence would be at stake. Today, the spectre of diversity is raging through the Belgian nation, shaking its very mono-identical foundation. All over the country, communities are unreservedly raising their consciousness about their own specific cultural identity and reclaim the rights for their members to freely express themselves, move around and settle wherever they want to. As a consequence, the Belgian nation is facing the difficult and traumatic task to re-found itself as a motherland that embraces all its diverse identities. At the same time, brother nations all over Europe are standing by and are wondering what will be the outcome of this glorious tide.

The architectural profession can no longer remain a passive and impartial observer in the face of this long-awaited rebirth of the different Belgian communities. Not only because architecture too has become a regionalized affair and is today directly governed by those communities (each with their own master-builder, architecture institute, yearbook and so on). But also in their daily building practice, architects increasingly have to deal with the accelerated demand of Belgium’s communities for expressing their architectural identity and protect their geographical integrity.

For this reason, we, members of BAVO, have taken upon ourselves the unpopular task of organising an exploration round on the most acute, stubborn and sublime problem of Belgium: the current deadlock between Brussels, capital of all Belgian communities, and its Flemish hinterland. Brussels is experiencing increasing difficulty to fulfil all of its obligatory roles as political, economic, cultural and geographic capital of Belgium without infringing on the right to diversity and territorial integrity of the surrounding Flemish communities. Moreover, the fact that it is also the capital of Europe as well as Belgium’s only global city causes Brussels to overflow and contaminate its wider metropolitan area even more. It thus puts the already tense and skewed relationship between Brussels and the surrounding Flemish settlements under even more strain, upsetting its inhabitants. And how could they not? The right of Belgium’s communities to their difference should never again be suppressed! Understandably, this crisis has today progressed to the point that it makes the country virtually ungovernable.

As self-appointed Royal Explorers, our aim is to de-mine this deadlock and cut the economic, political, social, cultural and geographical Gordian knot that Brussels has become. For this, we have set up a three-step plan. First, we will hear actors, stakeholders and observers on their views on the crisis, as well as consult them on possible ways out of the deadlock. Second, the findings of these hearings will be publicly discussed so as to measure their plausibility and popularity. Thirdly, based on the latter, we will determine possible trajectories that are able to once again secure the peaceful coexistence between Brussels and the surrounding communities, without the rights to diversity of the latter being offended. We will then inform the relevant ministers on both the federal and regional levels about the outcome of our exploration round, so that he or she can take appropriate action.

And what better place and time to undertake this most sensible project than at the 11th Architecture Biennale in Venice? First, the heavenly peace of the Belgian Pavilion allows us, as well as the participants and visitors, to reflect upon Brussels’ predicament from a healthy distance, far removed from the emotional debates at home. Second, the Biennale allows us to tap the knowledge and expertise from other nations about establishing enduring freedom and diversity. For the duration of the 11th architecture biennale we will thus take office in the Belgian pavilion. The latter will be refurbished into the headquarters of the Royal Explorer so as to allow us to execute our task to the best of our abilities, as well as to offer to architects of all nations of the world the unique opportunity to haptically and mentally experience in one-on-one fashion the conditions in which their Belgian colleagues have to operate on a day-to-day basis and help them to invent ways to cope with it. Facilities that will be provided in the pavilion include:

To conclude, as royal explorers, it is our solemn aim and most intense desire to pave the way for an enduring freedom among Belgian communities by correcting the asymmetrical power relations that have been allowed to develop between Brussels and its hinterland. We are proud to be entrusted with this royal task and will carry it out in a determined yet prudent spirit.

Proposal in the ‘1907’ competition for the Venice Architecture Biennial 2008, organized by the Flemish Government Architect and Flemish Architecture Institute, published in Stefan Devoldere, ed., ‘A+ 1907 After the Party’, A+ Belgisch tijdschrift voor architectuur, special issue at the occasion of the Biennale di Venezia 2008.

A Lesson in Added Architectural Value