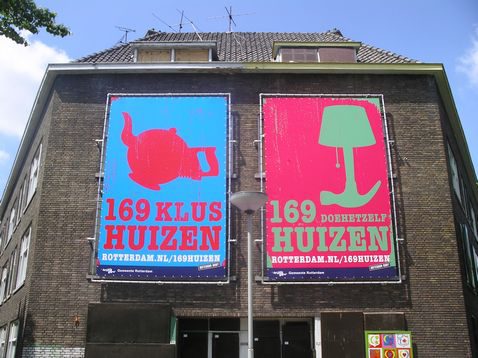 Within Rotterdam’s drive to become the next creative capital of the Netherlands, the Creative Class has replaced the Working Class as the city’s revolutionary subject. As a result the city has turned its attention from the perpetual dissatisfaction of the popular masses to the notoriously precarious working and living conditions of the ‘creatariat’. A perverse entanglement of architectural creativity, property rights, social revanchism and capitalist exploitation ensues, perhaps most visibly in a small experimental housing project in the Spangen neighbourhood.

For years featuring as the stage of a nationally broadcasted crime, Spangen is without doubt the most notorious socially depressed neighbourhood of the Netherlands. As part of a vigorous gentrification programme for the district, the Rotterdam Development Company facilitated an experimental housing project in Spangen called ‘The Poetic Freedom’. The concept was to give a dilapidated housing block practically for free to a group of people looking to buy, and have them renovate and restructure the block themselves. The future homeowners would have to invest a lot of their time, energy and money in the collective renovation of the block, and a number of limits were placed upon their enjoyment of the property: the participants were not allowed to sell or rent out the house for the first couple of years, and they were expected to actively engage with the impoverished local community through neighbourhood activities.

At first sight the Poetic Freedom is a moderate “gentripuncture” session – as it is called by the Rotterdam Development Company – with a noble social programme. However, immediately next to this block the same development company demolished huge chunks of social housing and replaced these with generic, commercial housing condominiums in state of the art contemporary architecture. This begs the question as to why it choses to develop one housing block in an experimental, retro-socialist fashion and organise the development in what they called ‘collective particular commissionership’? This means that although the people involved engaged in a collective design, building and living process they are nonetheless juridically considered as private homeowners. The main goal of the collective co-operation is thus to obtain a private house, to which the collective organisation stands in an instrumental relationship.

More critical perhaps, is that no clear formal commitments were made about the organisation of neigbourhood activities for which the new homeowners were officially recruited. Further, although this recruitment was public and open to all, in the final phase it turned out that the all participants were of the creative middleclass and not even one of them was a non-E.U. citizen. There is thus little guarantee that The Poetic Freedom will not behave like a highly exclusive “club of like-minded people” (as they themselves call it) opposed to the socially disintegrated neighbourhood. This club-formation was not only one of the main reasons mentioned by the participants to join the project; it is also played out as its condition of possibility: engaging other income groups that don’t posses certain know-how to join the club was seen by all involved parties as unworkable.

The uncertainty of a substantial contribution to the impoverished environment is all the more cynical if one considers the massive support The Poetic Freedom received from all kinds of governmental agencies and allied non-governmental organisations. Most important the city of Rotterdam used its full monopoly power as well as its budget for urban renewal to buy out the former homeowners and landlords. The Poetic Freedom was also facilitated with all the necessary organisational infrastructure and expertise by the Rotterdam Support Services for Housing. Not to forget that the direct link to national governmental bodies was used to circumvent payments the new homeowners owed to the tax authorities.

These various forms of top-down interference not only seriously questions the spontaneous ‘bottom-up’ character of The Poetic Freedom, it also shows how this seemingly more authentic housing production turns out to be its exact opposite: unthinkable without massive financial and organizational efforts of the government and part of a well-defined policy programme based on scientific reports. If not blinded by the free gift of a housing block to creative entrepreneurs we can see how the gain in this transaction is disproportionably on the side of the local government and housing corporations: while the local government hopes the gentrification of Spangen will increase its tax revenue, the housing corporation expects prices to rise from 1100 to 1800 euro per square meter.

The free house and many privileges offered by The Poetic Freedom would be a nice gift if it did not transfer onto its members the great hopes and expectations urban developers foster in the creative class. In the final analysis the loose network of The Poetic Freedom functions in much the same way as the family did in Margaret Tatcher’s famous dictum that “there is no such thing as society, only individual men and women and their families.” As a creative network The Poetic Freedom is, in the first place, a production site of true urban pioneers that are said to create a permanent revolution in the city’s culture as well as a social safety net that assures its members of possible commissions, social security and emotional help.

This allows us to posit The Poetic Freedom as the ultimate symptom of neoliberal urban development: it affirms the typical processes of social revanchism and creative exploitation in the form of the opposite: as low-scale, voluntarily, bottom-up, co-operative, alternative, genuinely creative phenomena. After all, this retrosocialist fashion of The Poetic Freedom cannot conceal its deep perverse capitalist undertone. We refer to the radical creative movement in Barcelona that rebeled against the real estate market and demanded a decent living wage with slogans that already anticipated the reactionary answer of the local government saying: “You will never own a house in your whole fucking live”. The mechanism of The Poetic Freedom is the exact opposite. Here the local government already anticipates the creatariat’s demand for decent working and living accommodation with the call of the obscene superego eager to tap emerging creative capital: “Take this fucking free house, you creative idiot!”

The first issue of &Magazine deals with the question of how property, in all its varied meanings, is situated within current architectural thinking and related fields of enquiry. The magazine is an initiative of School of Arts, Culture and Environment at the University of Edinburgh.