Mirror, mirror on the wall  who is the most critical of them all? 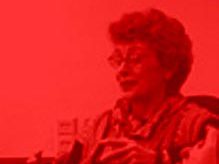 Since Gideon Boie has neglected to address a number of aspects of the Projective Landscape conference, his review begs a response from the organization of the conference, which will hopefully trigger further discussion.

At the conference, it became evident that projective (which was used as the central term because it most clearly encompasses the issues at hand  but one could also have discussed a pragmatic idealism or operative optimism, to name but two European counterparts) is a question more than an answer, an idea that still needs further definition. This is precisely why it seems worthwhile to continue this discussion, especially here in Europe, and not to reject the entire notion as useless American academic chatter.

Boie does have a point when he observes that the many one-liners made it difficult to see how serious and sincere the intentions were in organizing this conference. Yet some points were clearly stated: that the projective is not an attempt at a post-critical attitude, but rather seeks a different relationship to critique, a relationship in which the systematic (and often dogmatic) deconstruction of reality makes way for a more positive sensibility that allows for the projection of alternatives. On both days, a recurring theme was that, insofar as we can distinguish a single projective movement, it does not in any way try to identify itself as post-critical but rather wants to allocate a different role (both more embedded and modest) to critique. It raises the question whether neo-marxist critique is still a viable strategy, and tries to place architectural practice in a central position. The difficult but also valuable aspect of projective as an idea is that it is not founded on immutable ideologies but rather on reality as it appears to us. At the same time, it acknowledges that ideologies affect reality (and vice versa). This is precisely why architecture is better off with both its feet planted firmly on reality rather than stuck in ideological quicksand.
The review also rightfully notes that the conference did not achieve a clear enough definition of projective practices, yet it thereby neglects the discursive, questioning character of the conference. A number of very different people addressed the possibilities of a projective architecture in the two days of the conference. Out of these two days, Boie has distilled a filtered version of the conference that ironically supports its premises rather than undermining them. The work of the philosopher Bruno Latour was referred to a number of times (though remaining unnoticed in the review). Latour offers a succinct explanation of Boies strategy as the main problem with critical thinking.
According to Latour, the strategy of critique is as follows: first, the possible qualities of an object (such as a religious idol, a new idea, an object of consumption) are dismissed. The object itself, or so the critic posits, has no inherent qualities. It is merely the (deluded) subject that projects his own illusions on the object. Should this subject however begin to think that he is a free agent, critique also has an answer. We are, after all, never free in our actions: our behavior is determined by ideologies, power structures and social conditioning.
The result is clear: in both cases there is (fortunately) the critic who can point out the error of our ways. Whether it concerns the object itself or our actions. In other words, maintaining a relationship with the world based on neo-marxist critique is a win-win situation. This makes it an easy position to occupy: the critic is always enlightened, remains out of the line of fire. I must confess that I see more value in actions set within reality, and investigating the possibilities we can create within the world as it is given (and as we have made it).
Its better than staying out of range.