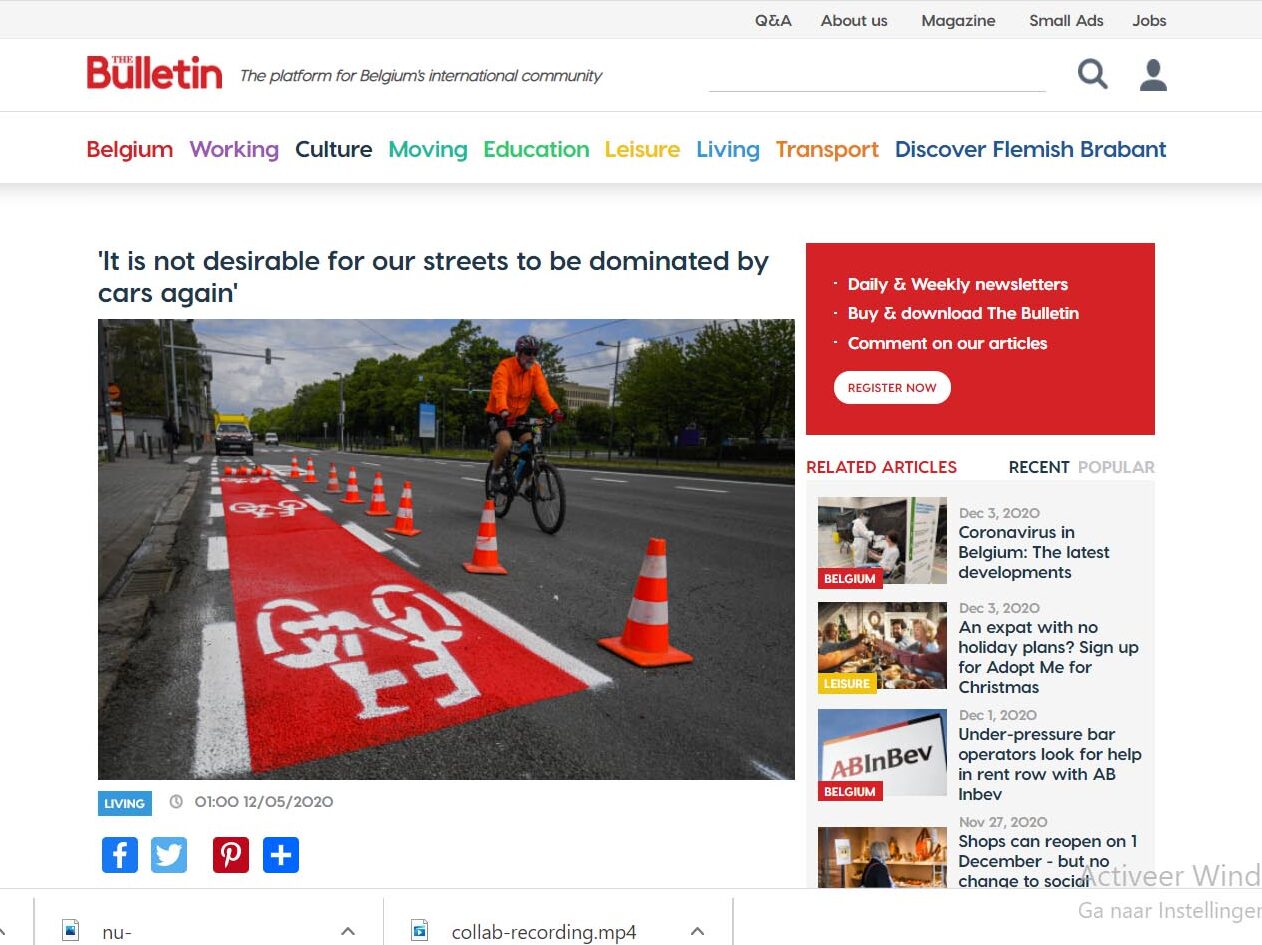 Thousands of premature deaths from air pollution could be avoided if Belgium gives proper thought to the post-coronavirus future of its towns and cities, experts have said in an open letter jointly published today by The Bulletin, Le Soir and De Standaard. The letter is addressed to the national security council and the expert committee advising on Belgium's "exit strategy" and is signed by almost 100 doctors, scientists, academics, environmental campaigners and town planners.

During the COVID-19 response, the spatial dimension has not received the attention it deserves. Yet over the centuries our built environment has been planned as a spatial vaccine. A healthy environment is laid down in standards, rules and plans. Basic facilities are available collectively and individually and parks, squares and green spaces ensure socio-emotional health. In recent weeks it has become clear that in densely populated neighbourhoods there is a lack of space for physical distancing. Local measures are taken here and there, but a national roadmap is lacking.

In spite of warnings about an imminent mobility crisis, the exit strategy is being drawn up without taking spatial implications into account. Prime Minister Sophie Wilmès called on people to avoid taking public transport and to travel by car instead. Active transport modes were not prioritised and were mentioned only as an afterthought.  The limited attention paid to spatial infrastructure is also evident in the composition of the GEES: there are no town planners,  and the Ministers of Mobility and the Environment have also been sidelined. The associated task forces are made up of economists and business representatives.

The question is how an economic recovery can be planned without taking into account the transport of people and goods. The pictures of traffic congestion after the easing of restrictions in Chinese cities are a first indication of what will happen if we do not take decisive measures to discourage car use. Congested roads are not just a mobility issue: they trigger a chain of adverse effects in several areas: health, the economy, quality of life and road safety.

Mobility is primarily a public health issue. Air pollution causes about 500,000 premature deaths a year in Europe, including 9,300 in Belgium. The WHO guideline values for fine particles are exceeded in large parts of Belgium. The legally binding European limit value for nitrogen dioxide is not respected at locations with dense traffic. Because of the lax approach to improving air quality, the various authorities in our country are already being taken to court. It is therefore difficult to understand why the coronavirus health crisis is being fought without taking into account the other, much more insidious and deadly health problem. Moreover, although not yet peer-reviewed, studies show that air pollution may be a catalyst for the lethality of the virus. A reckless restart in terms of mobility risks being an extra stimulant for mortality in the next wave of COVID-19.

Moreover, mobility is inextricably linked to the economy. An efficient restart of the economy requires easy access to shops, businesses and offices. In a city like Brussels, there are an average of 5.4 million journeys every day, 35% of which are by public transport. Car traffic already comes to a standstill on a normal working day. If an additional 1.9 million extra trips are made by car when lockdown ends, gridlock is inevitable.

Mobility also determines the quality of life in public places. During lockdown, towns and cities lose many of their attractions, such as cultural events, lively bars and pavement cafes and a broad range of shops. But lockdown also means fewer cars and literally opens up space for people who are stuck at home with their children, in a small house or apartment without a garden or balcony. The weeks-long quarantine requires special efforts from many city dwellers. In view of this, it is not desirable for our streets to be dominated by cars again.

Finally, there is the lack of road safety in Belgium. When the schools reopen on 18 May, many children will once again be on the streets during the morning and evening rush hours. Globally, traffic accidents have become the biggest cause of death among 4- to 25-year olds. The paradox is that unsafe roads incite parents to drive their children to school, thereby making the roads even more dangerous. This vicious circle threatens to become a downward spiral if the car is now also presented as the safest means of transport in the coronavirus era.

These four arguments make clear that the National Security Council must take the issue of mobility seriously when drawing up the exit strategy, with the assistance of mobility experts and town planners. We have two recommendations to make.

First, public information should clearly prioritise active modes of transport, in accordance with the WHO guideline: “whenever feasible, consider riding bicycles or walking”. It is important that the government clearly calls on people to choose active modes of transport in preference to the car. This is a measure that has a positive impact on health, by promoting physical exercise and also helps to limit the spread of the virus. In the same vein, public transport should not be stigmatised; the public should just be advised to use it safely.

Second, the authorities should issue guidelines making physical distancing possible in public places and on public transport. This will involve increasing the capacity of safe cycling and walking paths, eliminating missing links and connecting long-distance cycle routes with the local cycle route networks in towns and cities. Park & Pedal interchanges on the outskirts of the city are needed to accommodate traffic from beyond the suburbs. The creation of living streets (woonerven), car-free zones and well-planned traffic filters can drastically reduce the impact of commuter traffic on the city and greatly improve the quality of life. The development of neighbourhood facilities and a focus on local communities will encourage people to travel on foot or by bicycle. Eliminating parking spaces in front of shops or making shopping streets car-free enables people to queue without having to choose between public health and road safety.

In the exit strategy many decisions are being taken without studying the spatial impact. COVID-19 disrupts established patterns, causing people to behave and move around differently. This paradigm shift requires a fast and decisive spatial management plan that avoids chaos and gives the economy and society every opportunity to restart.