Outline for an elective course on the postproduction of architecture, starting in the academic year 2020-2021 at the KU Leuven Faculty of Architecture, campus Brussels.

The most important phase in art production is what comes after the actual work, argued Nicolas Bourriaud. Using the term postproduction, Bourriaud referred to the act of film making which is never simply done with shooting of images, but requires cutting, editing and finishing by tertiary parties. Translating the idea of postproduction to the field of architecture, we could say that the most important phase of architectural production only comes after the realization. It forces us to leave behind the two mythical points that define architecture discourse with the commission as the genesis and the realization as the end point. The postproduction of architecture is located in the circulation of images through media platforms and the wrapping of the work in discourse.

In the phase of postproduction the agency shifts from the figure of architect to roles usually regarded as merely operative, such as the curator, editor, graphic designer, photographer, journalist and other intermediaries. Their role is to put the architectural object in a context that enables the public to consume the work, understand its meaning, recognize it as part of an oeuvre, consider it best practice in this or that policy, and debate it as part of an urgent social issue. It allows us to understand why Boris Groys claimed that the subversive power of art is not so much in the hands of the individual artist, but much more in the role of the curator who is able to freely pick and choose the art works that fits his/her metanarrative.

The idea of postproduction is also relevant for architectural education. Although the studios in the Faculty of Architecture could be considered as many workshops for innovative visions on the city, often the results are kept intra-muros. The frame of 12 weeks puts all stress on production but loses its meaning once the pedagogical setup in over. In the school context postproduction is about the dissemination of research results, the putting into action of the newly acquainted knowledge, the creation of feedback loops, etc. And it presupposes an atmosphere of deschooling. Scholarly activities are connected with ongoing social debates immediately allowing the everyday reality to infuse education and research.

The elective course will study the issue of postproduction in the field of architecture through action. It means that we will set up an editorial office and experiment with publication, visualization, verbalization, textualisation, photography, advocacy, formatting, printing, and more. The editorial office will work towards the publication of books, articles and commentaries, tapping into the different sources at the Faculty (studios, research, library, Sint-Lukas archive, lectures, …) Part of the work will be looking at interesting practices of editing in architecture and try to understand their motivations, strategies and effects. Another part of the work is studying literature in architectural theory (or media theory, why not) on the issues of representation, dissemination and reception. 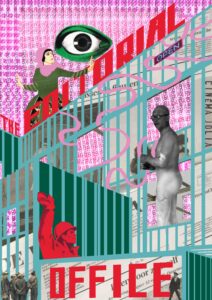